Since the beginning of May the International Space Station has been making regular passes across the night skies of the UK. The ISS travels at 17,500 miles per hour and takes around 92 minutes for a single orbit of the Earth. It appears in the night sky as a bright star moving quickly from West to East.

If you’re interested in looking up at the Earth’s man-made satellites I highly recommend you follow VirtualAstro on Twitter or check out his Website for details of what you can see and when you can see them. I also use the ISS Detector app (Android), which gives you accurate timings as well as a compass to show exactly where to look in the sky.

On this particular evening the ISS was being tracked closely by a supply ship, also visible to the naked eye but less bright than the space station.

First I had time to capture the crescent Moon, Venus and Mercury amongst the fading orange light of the sun set. 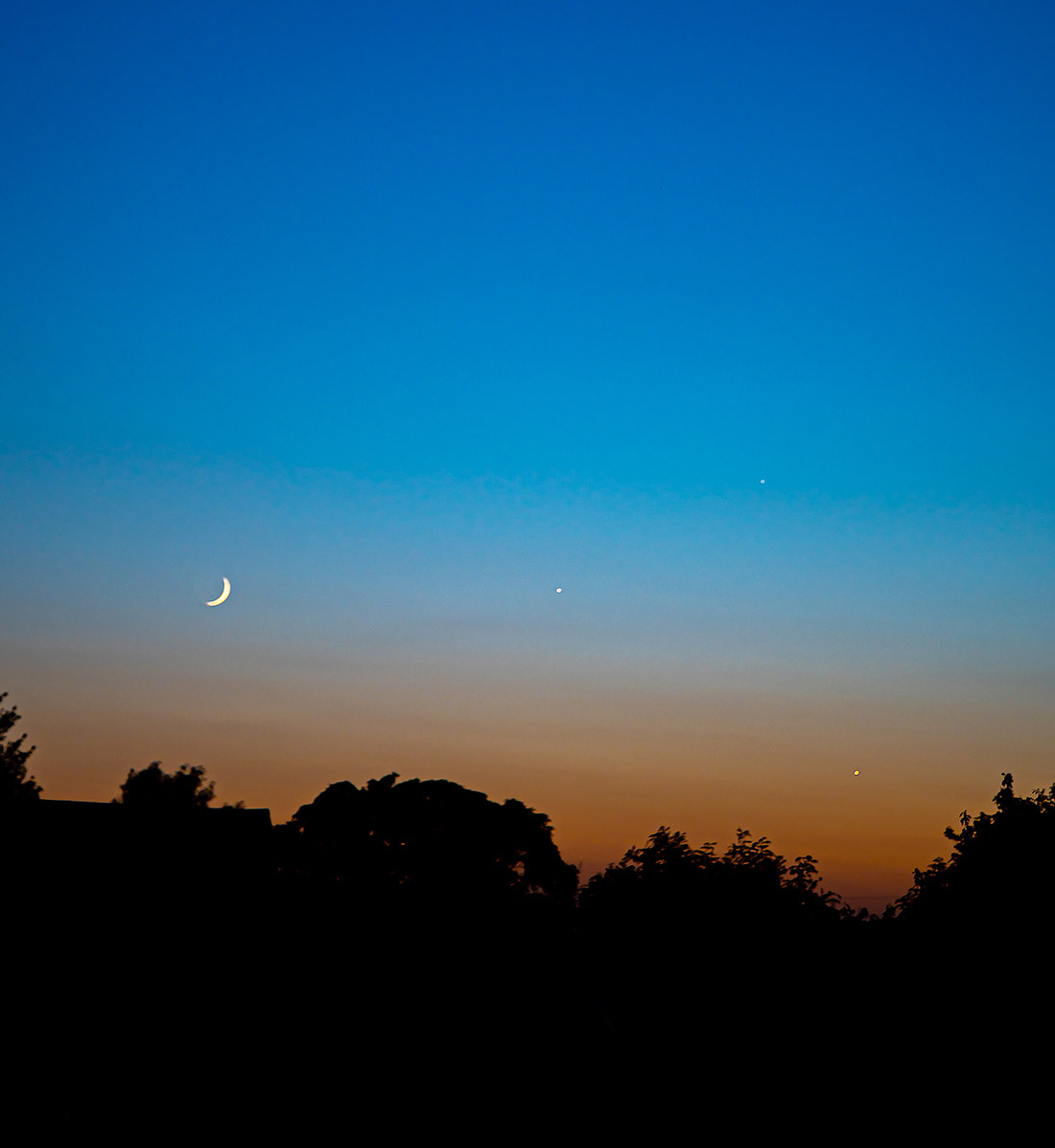 The space station appeared first and was high in the sky, very bright. Following about a minute or so behind was the supply ship on almost the same path. It was a quite amazing experience to see them pass together and really added a feeling of scale to the event. The supply ship was seemingly rotating as it kept giving of a shimmer of light and had a distinct orangey brown colouring. I composed my shot to have them both coming in from the right with Wakefield in the distance. The proximity to both city and nearby street lights meant that I'd be capturing a lot of light pollution at the bottom of the shot but I hoped to used this to create a colourful final image.

I started the exposures about 10 minutes before the ISS was due and using interval mode set 70 shots at 33 second intervals. From previous attempts I'd learned that a 30 second exposure was actually taking around 32 seconds to complete and to allow a little time for processing 33 seconds was the number I opted for. Even though the ISS was only visible for about 5 minutes the total shot time was around 40 minutes to acheive longer star trails.

When I loaded the images into Photoshop I was pleased with the results. In this first attempt at processing (below) I was able to really bring out both the ISS (top trail) and the supply ship (bottom trail). I had to work quite hard to bring through the supply ship, which was very faint in the raw files. I noticed towards the end of the sequence the interval mode had missed a couple of shots and was leaving small gaps in the trails. 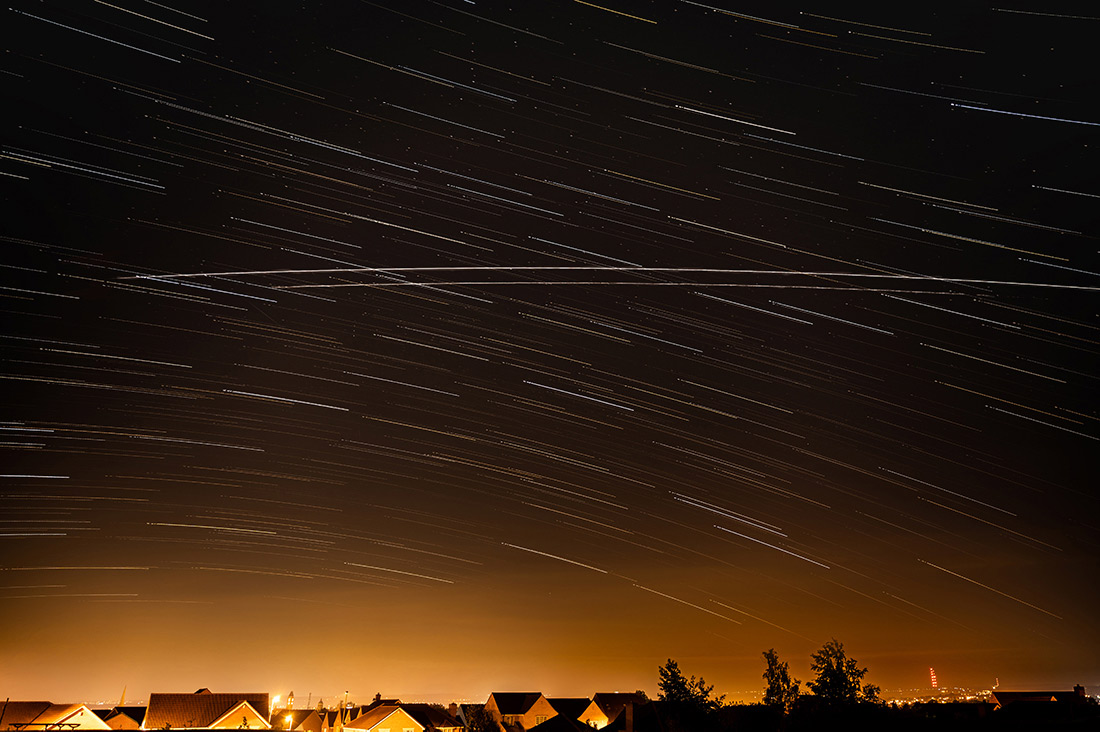 This next image is using exactly the same images as before but only including the 5 or 6 images that contained the space station and supply ship trails. I then masked out the stars from all but one of the images to leave a nice long space station trail but no trails on the stars. 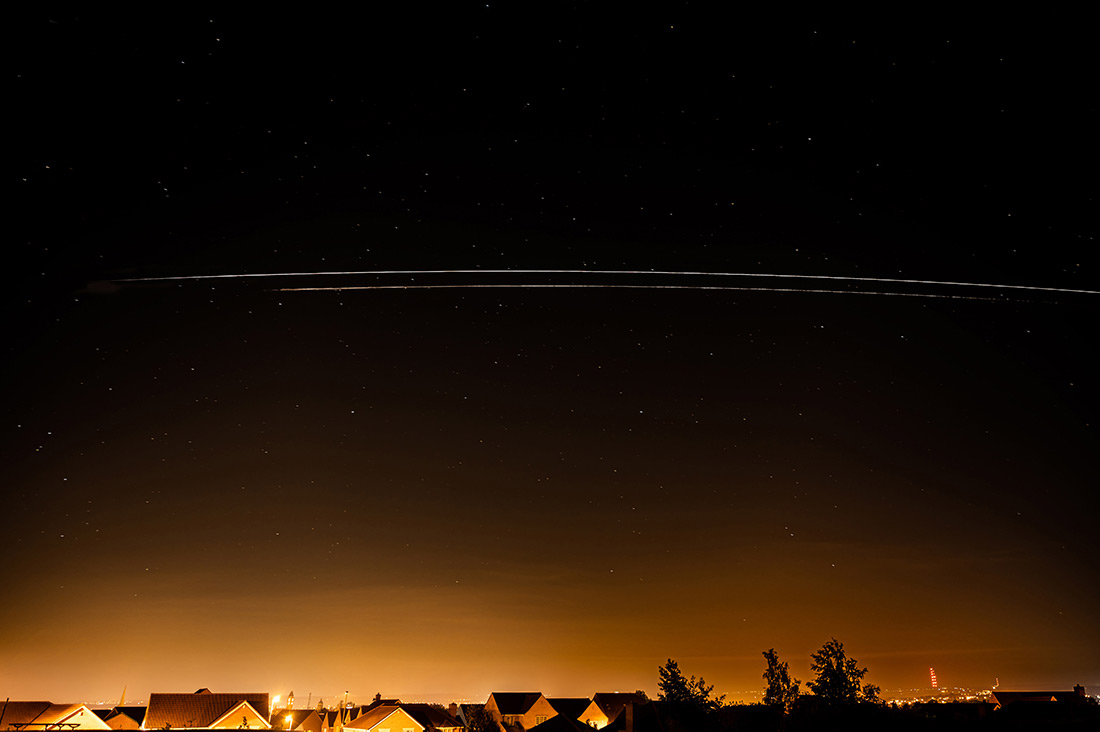 For the final image I removed the gaps in the star trails and by not trying to pull out the supply ship trail I was able to acheive a much cleaner end result. 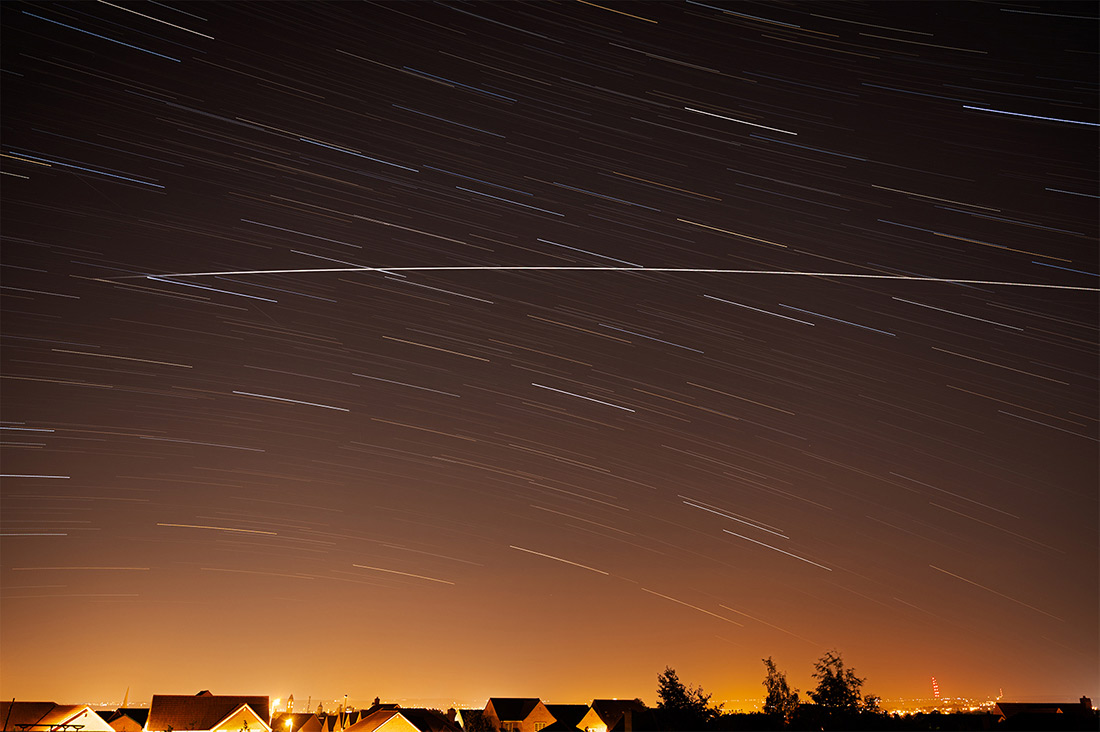